If you're anything like most homeowners, you haven't paid much attention to your smoke detector since it was installed and tested. But that was until that frustrating chirping in the middle of the night as a reminder to change the smoke detector batteries. This article will focus on smoke detector battery replacement to ensure your safety and that of your family.

Why Should You Replace Smoke Detector Batteries?

You had about 17 minutes to flee a house on fire in the olden days. Unfortunately, this time has greatly reduced to about 4 minutes, thanks to the use of synthetic materials in homes. In addition, these materials, found on your drapes, couch, pillows and carpet, burn faster and hotter compared to natural materials.

The NFPA (National Fire Protection Association) reported that 3 out of 5 deaths in the US occur in homes without a functional smoke detector or no smoke alarm at all. In addition, the US Fire Administration(USFA) found that a third of fire deaths occurred in homes with no smoke detectors.

Properly installed and maintained smoke detectors cut the risk of dying in a fire by half. This makes this often forgotten electronic device very important and a must-have in every household. Additionally, having an installed smoke detector is not enough. It's essential to test it for functionality every other month regularly.

In agreement with the CDC (Centers for Disease Control and Prevention) research, carbon monoxide(CO) is one of the primary causes of accidental deaths in the US. In addition, CO poisoning is responsible for about 400 deaths and approximately 20,000 emergency room visits yearly. This is to say that having a fully functioning smoke alarm is key for your family's safety.

Battery-operated smoke detectors run on batteries alone. Conversely, hard-wired smoke detectors use electricity to run. However, they also have a backup battery used during power outages. Additionally, the battery backup runs low and will chirp when it's time to replace them like any battery.

All smoke alarms have batteries, so don't get surprised when your hard-wired one starts chirping.

How Often Should You Replace A Smoke Detector's Battery?

Unlike conventional smoke detectors, smoke alarms need to be replaced every 10 years. Carbon monoxide alarms need replacement every 5-10 years. You can check the back of the alarm or ultimately replace it if you're not sure how old it is.

Remember that replacing batteries in a broken smoke detector will not do any good. So, double-check that your fire alarm is functioning by hitting the test button.

It's vital to note that sealed 10-year lithium-ion battery detectors are not replaceable after their lifespan is reached. Instead, properly dispose of the entire unit and replace it with a new one. In addition, all detectors should be replaced 10 years after the manufacture date anyway, so this shouldn't be a problem.

How Do You Replace the Battery of A Smoke Detector? 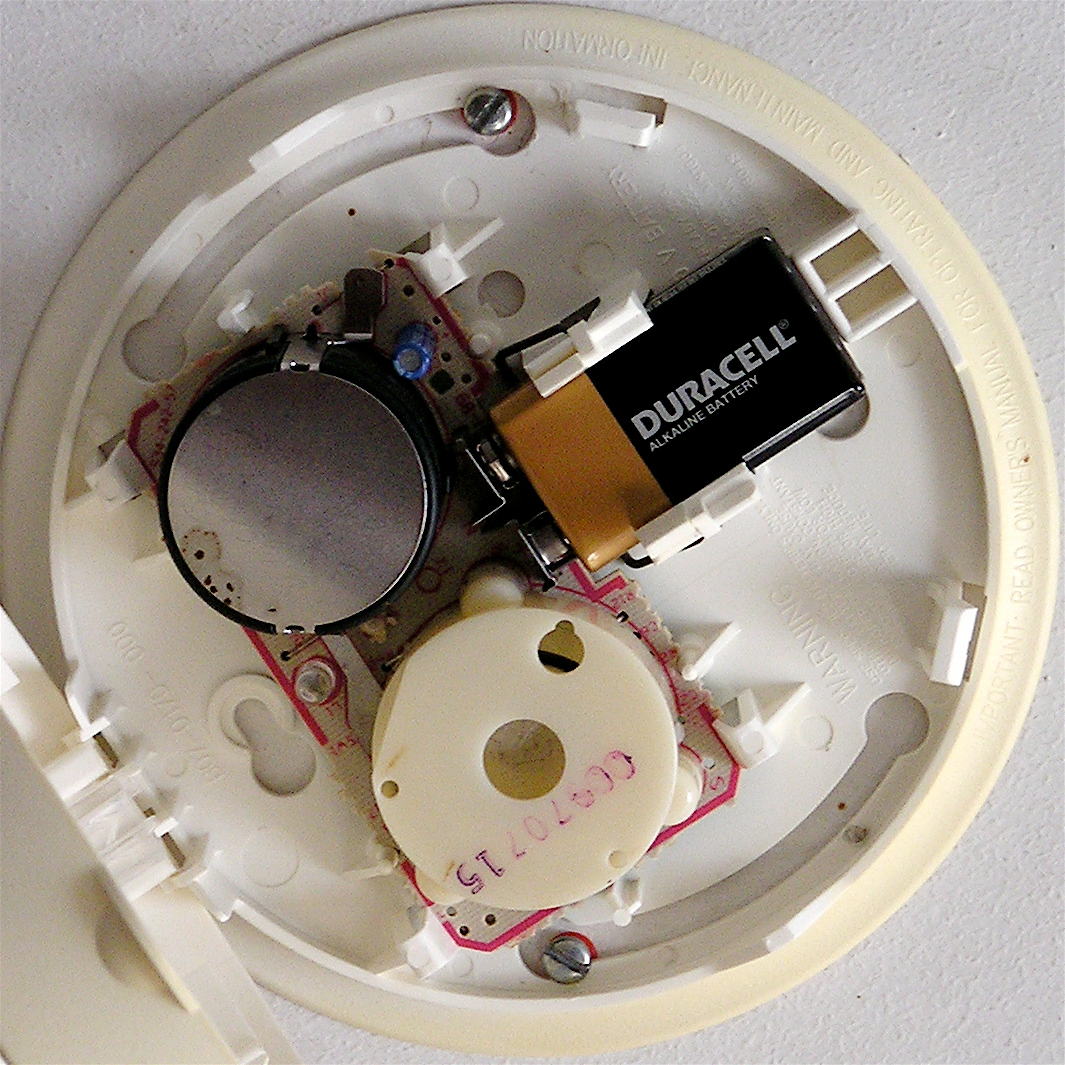 Below are the step-by-step instructions you should follow when replacing dead batteries on smoke detectors.

Safety comes first when replacing batteries from your smoke detector. For battery-powered fire alarms, the first thing you need to do is to set your home's security system on test mode. Conversely, power off your home's electrical system if you are using hard-wired smoke detectors.

2. Remove the Smoke Detector's Cover From the Base

Most detectors will easily open by gently twisting them in the counterclockwise direction. Similarly, others will pop open, while you might need a screwdriver for some. If you are unsure how to open the base, check the user's manual for the manufacturer's instructions.

You will also find that smoke alarms need to be removed from the ceiling to replace the batteries. If this is not the case with your model, the front-loading door(base) will release upon twisting while the mounting plate will remain on your ceiling.

The next step is to replace the old battery. Upon opening the smoke detector base, you will find three main internal parts, the horn, sensing chamber and battery compartment. You may also find a house voltage power source in some detectors. However, your main focus should be on the batteries.

Note that if the battery is corroded, you will need to replace the entire smoke detector unit.

Now unclip the old battery, set it aside and replace it with a 9V lithium battery. It is important to ensure that the battery terminals(male and female/ + and -) are well-matched. In addition, check that the batteries are pushed in and connected in the battery compartment before attaching the base.

This step involves locking the cover back to close the smoke detector. Once the base is tightly attached, you will see that the mating marks are aligned. In addition, your smoke detector's LED light will blink a green color to show that it is powered on.

You will find a test button on the face of the smoke detector. Press this button to complete the battery replacements. Let's delve into this step further below.

How Do You Test Your Smoke Detector After Battery Replacement?

After replacing the battery in your smoke detector, the last but most important step is testing it. This super easy step confirms that the new battery works. You will need to press the test button on the smoke detector.

You can check the user's manual for instructions on locating the button if it's not direct.

You will first need to turn on the circuit breaker for hard-wired detectors to restore power to the detector before testing.

If you hear nothing after pressing the test button, chances are there's something wrong with the new batteries or the entire unit. Try different batteries and test again. If you still hear no sound, you will need to replace the smoke detector.

Most detectors have a 10 years life expectancy, after which they'll need to be replaced. If you're unsure when the detector was installed, check the manufacture date to be sure.

If you get a shrill alarm sound after pressing the button, this means that your batteries and detector unit are fully functional. Press the button yet again to turn off this sound. In addition, you can say goodbye to the annoying chirping sound.

How Often Should You Test the Smoke Detector?

It is recommended to make testing a monthly routine to ensure your detector is in perfect shape. In addition, you can set a testing reminder on your calendar to ensure you don't forget this.

If you are used to replacing the battery of your smoke detector or other battery-powered appliance, then you know how it is done. If not, you will find configurations that ensure the detector is not replaced without batteries and the batteries are correctly installed.

These odd configurations include:

Other tips when dealing with a smoke detector include: